James Cameron pulls Moby Dick, Free Willy, and Chrono Cross philosophy into his sci-fantasy Fern Gully sandbox spectacle, descending back into the depths of the ocean where he belongs to tell an effective, safe story about family that looks fantastic.

Avatar: The Way of Water has only ONE skeleton, but it’s the best looking computer generated, high frame rate skeleton you’ll ever see.

“We don’t deserve the impossible.”

An effective, inventive, sci-fi horror with satirical Hollywood elements that, above all, made me think about the natural universe and the grand morality of humanity’s relationship with its denizens, from the horse actors to primates to people, aliens and beyond.

My VHS cover pull-quote: “The characters probably make some of the most intelligent and genuine in-the-moment decisions in film history.”

“You always ask questions at bedtime.”

A grounded, gorgeous contemporary fantasy about the connections between parent and child, of inner child and outer adult, of mother and daughter. I won’t pretend to be the best person to speak with any authority on the themes of motherhood at play here, but what I will say is that Céline Sciamma once again elevates a simple premise with substantial emotion and tight storytelling.

My VHS cover pull-quote: “If I met my mother’s younger self, I would probably have just talked to her about my Pokemon cards.”

A near-future meditation on AI and memory, as visually stunning as it is achingly subtle. Kogonada also made the movie Columbus (2017), which I cannot recommended enough, especially now as a companion piece to this picture.

My VHS cover pull-quote: “There is a dance sequence in this that, along with the famous Oscar Isaac one in Ex Machina, makes a great case for inserting a seemingly out of place dance sequence into any sci-fi feature about AI gaining consciousness.”

“I am utterly pointless.”

A bit of a modern E.T.: The Extra Terrestrial, where E.T. is a little sleek robot voiced by Zach Galifianakis and society is hooked on social media and instant gratification instead of… Reaganomics? I don’t know, I wasn’t alive back in 1982. I don’t think anyone was. Regardless, this movie is a perfectly emotional exploration of what real friendship looks like and a satirical takedown of Apple (an obvious stand-in for Tim Cook doesn’t care if children die, which, yeah, I can see that), Facebook, and big tech in general. The latter was done earlier this year with the more manic and dysfunctional family-oriented The Mitchells vs the Machines, so these two movies exist as a bit of a prefect double feature. Dysfunctional families, dysfunctional robots, friendship, and the negatives (and positives!) of unchecked tech.

My VHS cover pull-quote: “There is a throwaway line about killer clowns living in the woods, which is why children don’t go in there to play anymore, which makes me think this movie takes place in an entirely new branch of the timeline after Harambe was shot in 2016 where those creepy clowns popping up everywhere in the north around then really kind of took hold of the world. Ron’s Gone Wrong would be very disappointed in this Reddit-addled VHS cover pull-quote.”

“Fear is the mind-killer.”

A sumptuous adaptation of half the influential novel that captures the weirdness, introspection, and pre-Star Wars design of 1960s sci-fi (and tries to address some of the dated elements). Plus, sandworms!

My VHS cover pull-quote: “It is weird that these sci-fi guys have names like Paul and Duncan. We should just replace the first letter of their names with X. Xaul. Xuncan. Lady Xessica. There we go.”

A less inventive sequel that has lost the novelty of the original but not the spirit or solid filmmaking. It relies too much on the ‘people making dumb decisions’ trope in horror movies, though, and doesn’t do enough to separate Cillian Murphy daddy figure from John Krasinski daddy figure. I’m definitely into the world, that main characters, and I’m looking forward to parts III – IX and beyond as long as it’s profitable. Like The Purge. Did you know there’s a new entry in the Purge series called The Forever Purge coming out?? What even is that?

My VHS cover pull-quote: “Spoiler, but let’s stop killing Djimon Hounsou in movies. He was a cool, chill character who died stupidly just because they needed him out of the way for the ending.”

“Who would have thought a tech company didn’t have our best interests at heart?” 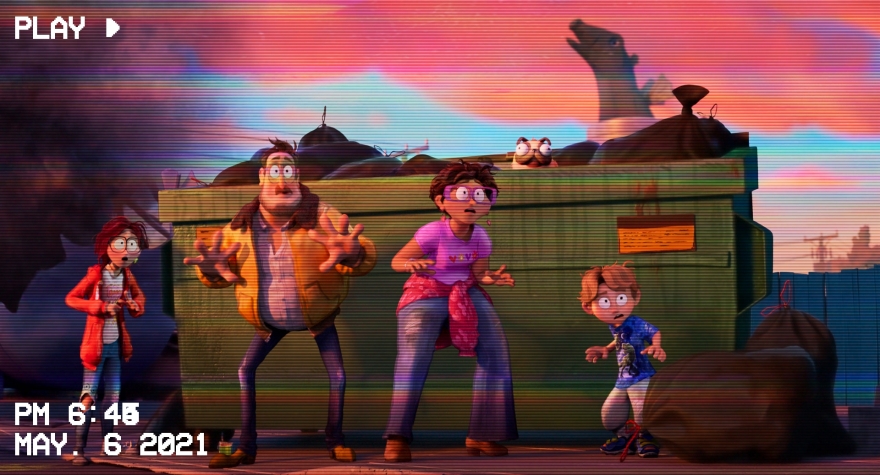 The animation techniques honed in Spider-Man Into the Spider-Verse are let loose and used to tell the frantic, heartfelt story of a chaotic cartoon family against the machinations of a Mark Zuckerberg stand-in. In terms of energy, it feels like the next evolution or step up from the Cloudy with a Chance of Meatballs movies, which are both classics in my book of modern movies that most people don’t think (and probably aren’t, actually) classics but I like quite a bit.

This, however, feels destined to be an actual classic whose legacy may only be hampered by the relatively tame marketing push and it just being dropped on Netflix instead of having a meaningful theatrical run. Having to watch a film with blink-and-you-miss-it visual flourishes on a TV really made me long for the big screen and the togetherness theater experience and all that. But that’s hardly the movie’s fault! The film is a kinetic, hilarious techno journey into a sugar-addled Asimovian not-too-distant-future with the requisite (and fairly progressive) family component to bring the emotion.

My VHS cover pull-quote: “There is a particular scene in this that has been making the rounds on the interweb involving a deadly Furby colossus spouting eldritch phrases, which is why it is my favorite film of the year. If I say something else is my favorite film of the year in December 2021 or something, don’t listen to Future Nick. That asshole doesn’t know what he’s talking about and he’s an old person who’s out of touch with everything. His time is over and he doesn’t even realize it yet. I, on the other hand, am young. I am important.”

“Maybe this is our true nature.”

It’s Lord of the Flies in Space and now you know the whole movie which isn’t really a spoiler. Not as “sexy” or chaotic as the trailers and posters tried to make it seem, but it does at least try to discuss toxic masculinity and has a distinct and capable visual style that Neil Burger has evolved since shooting Limitless.

My VHS cover pull-quote: “I saw this at a drive-in and they paired it with Chaos Walking, which made it a B minus shitty sci-fi double feature kind of night. Chaos Walking actually kind of feels like a distant sequel to Voyagers, both attempting to tackle toxic masculinity from an almost wholly male perspective and botching it quite a bit by downplaying the fem characters.”

“We can’t indict the cosmos.”

A paranoid, whispered assembly of folklore and cosmic horror happenings that explores many permutations of this kind of story before vaguely settling into one collectively conjured nightmare. The CULT following it’s gaining is well deserved.

My VHS cover pull-quote: “I don’t need much to enjoy a movie, just a skeleton that’s all kinds of H.R. Geiger/Alien-inspired in the first 20 minutes like this has. Come on, Hollywood!”